A cat tied to a pole 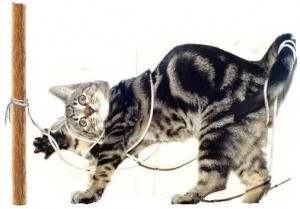 Have you seen the film “Eat, Pray, Love”? In the original book Elizabeth Gilbert tells a cautionary tale heard during her time in an Indian ashram.

The story tells of a great saint who was always surrounded by his followers, with whom he would meditate for hours everyday.  The saint had a young cat who used to bother them all during meditation by walking through the temple meowing and purring. So the saint came up with the practical solution of tying the cat to a pole for the duration of the meditation so that people would not be disturbed. Every time they meditated they would first tie the cat to the pole, and this became a firm habit, and no one thought of beginning to meditate without first tying up the cat. It began to seem part of the ritual. So when the cat died, the saint’s followers were panic-stricken and a major religious crisis erupted: how could they possibly meditate now without a cat to tie to a pole? How would they reach God now?

How many daily rituals stem from forgotten and obsolete reasons? I have a sneaking feeling that probably an awful lot more than we realise …

I heard about someone who regularly used a delicious chicken recipe passed down in the family from her great-grandmother. One day she questioned her grandmother about it. “The chicken tastes so good,” she said. “The recipe says always to chop the chicken in two – is that the secret?” “Ah, no,” said the old woman; “my mother always did that because her cooking pot was too small to hold a whole chicken.” And everyone had just carried on doing it without question.

“Say please, say thank you,” I parroted to my children, or even, “What’s the magic word?” (pause while I cringe) as if that was the point. What I occasionally got instead was anger: “Thank YOU!! for giving back MY TOY!” when the original point behind the word was to feel and express gratitude. I saw a politician say “Sorreee!” in much the same way once … twice actually. It’s a bit like chopping the chicken in two; the word completely lost its original purpose.

Organisations spend considerable effort on “behavioural training,” such as the customer care instruction to say, “Have a nice day,” or “Enjoy your meal.” I would love to compile a video of the times those statements have been delivered with boredom or even resentment! But sound-bite ritual is satisfied: the cat has been tied to the pole.

I wonder how much of this behaviour without meaning stuff we could let go?

–        this week’s politically correct word for instance – I can’t keep up and surely it’s the attitude that counts?

–        parroting the ‘right’ words as if that’s alright then. Ditto when someone says the wrong thing and motivation isn’t taken into account – whatever the red-tops assert!

–        behaviour “management” – people can’t be “managed” into thoughtfulness or any real learning – they can only be motivated.

–        complex bureaucracy that has lost its original purpose

What would you let go of?

Even our fear responses are behaviours with lost meaning if they belong to an outmoded story or someone else’s experience. Why take on inherited fears when we don’t even know what the cause was? Most of the “stuff” that sabotages us comes into this category.

Robert Dilts told me the story of the monkeys and the banana (taken from an experiment by G.R. Stephenson in 1967 I believe) which illustrates the point.

There are some monkeys in an experimental cage. The researcher hangs a banana on a string at the top of some stairs in the cage. Whenever a monkey climbs the stairs to get the banana he sets off a cold water hose which drenches all the monkeys in the cage. So, pretty soon, the monkeys prevent any single monkey from climbing the stairs and setting off the hose in an attempt to reach the banana.

The researcher turns off the water so that it is now safe to approach the banana. But the monkeys continue to stop each other from approaching the stairs.

One by one the monkeys are replaced by new monkeys. As each new monkey enters the cage it is attacked by the other monkeys when it attempts to climb the stairs, so it learns not to. Eventually, every monkey in the cage has been replaced, so no monkey now has ever experienced the soaking. But no monkey ever approaches the stairs again. That’s just the way things are. Another ‘religious’ ritual is born; another thought virus.

Achieving what we want is as much and more about letting go as about go-getting.

We’ve just had the latest two-day NLP training on Leadership and Influence. The distinction between behaviour and the values and beliefs that run that behaviour is a vital one. Yet the two are confounded constantly. I love the way NLP clarifies human action in so many ways and helps us get to the point. It stretches our ability to think and experience; participants love the challenge and grow in awareness and genuine confidence. It’s also wonderfully liberating to let go of stuff that gets in the way of success and happiness.

My next 2-day NLP Workshop is Coaching and Change on 14-15 April.  Coaching – conversational change – is one of the best developments of the last twenty or so years. It is awe inspiring to witness the life changes that people achieve through coaching. Come and enjoy two days of some of the best coaching-learning. More information at www.voiceofinfluence.co.uk.

And before that in the calendar, the next Voice of Influence Workshop is on 31 March – 1 April. This small-group-coaching course will take you from performance anxiety or a mild discomfort about presenting to inner confidence and assured delivery without notes – plus you’ll get excellent voice coaching. We already have a great group this month but there is still space for you, so look on the website for information. If you feel daunted, don’t let it put you off – you’ll find what you are looking for – and people who arrive scared always say they enjoy it.

If you are self-funding, work for a charity or are in genuinely difficult circumstances feel free to ask about special deals.

If you are looking at the website, take a glance at the testimonials. Most people come to these trainings through personal recommendation.

How to Raise Your Profile – NEW E-course on my website

Do you sometimes feel invisible and unappreciated? People don’t seem to listen to what you have to say? What seems to you the natural way to behave just doesn’t seem to be what is wanted around here? Or you’ve been told you need to raise your profile a bit more?… Whatever the reason, this e-course will show you that it is completely possible – for you – to be listened to, taken seriously, respected and remembered positively without changing the fundamentals of who you are.  Hope you enjoy  it!