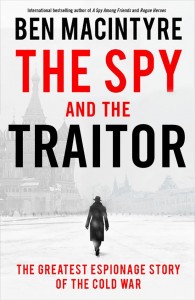 Oh my goodness! I’ve just read The Spy and the Traitor, the true spy story of the Cold War by Ben McIntyre. John Le Carré called it the best true spy story he had ever read. It’s certainly a gripping tale.

Reading it, one thing that strikes me forcibly is the amount of misinformation there was in the media and political statements during the Cold War. We the public, let alone most politicians and journalists of the time, didn’t know the half of it. The Russians were even trying to alter the course of our elections, though without success, as far back as 1983. MI6 from time to time deliberately fed misleading information to our politicians and the media, in order to guard their sources and protect our democracy. For me, it’s a strong reminder of how we are unknowingly fed inaccurate information at every turn and can do little about it. Anyone who has worked for the secret services would say it was ever thus.

It’s not just the matter of the odd bit of wrong information. It shows us how, through such strategies, whole nations can be caught up with a mood, a fever, an energy that pushes inexorably in one direction.

In the early 80s, the chairman of the KGB, partly spooked by the gung-ho rhetoric of newly elected US President Reagan, announced to his senior KGB officers that America was planning to launch a nuclear first strike to obliterate the Soviet Union. (They weren’t.) He ordered his officers to bring back as much evidence as they could. And KGB chiefs in various countries around the world brought back evidence simply because not to do so would have been seen as a failure, thus stoking the flames of paranoia. In 1983, unbeknown to most of us, the world drew very close to nuclear conflict, based on a lie.

Fortunately – spoiler alert – a spy feeding information to the British Government at the time was able to alert his British handlers to USSR thinking and the British in turn were able to calm the Americans.

It makes me think, fake news is one thing, and the world is, was and probably always will be prey to it. But getting caught up in crowd fever is another. I’m aware of the forces even in my own life. A month ago it was the inexorable build-up-to-Christmas fever, then the FOMO (Fear Of Missing Out) madness of post Christmas sales. And now it’s hype about the countdown to leaving the EU and the shift of power in the US House of Representatives. Negative energy is particularly powerful when augmented by crowd hysteria. You know: “Lock her up!” (Hilary Clinton), the vans with “Go home or face arrest!” emblazoned on the side (illegal – well paperless – immigrants), the conspiracy theories …

I’m not immune – far from it. But I do know that I don’t have to get caught up in crowd madness. I don’t have to get worked up by seasonal promotions and media hype. And regarding manipulation on a wider scale, I don’t have to read the news on line that filters my preferences (prejudices), or listen to it on the radio and watch it on TV seven or eight times a day, which gets me incensed against particular individuals and raises my blood pressure. I don’t have to accept the media’s choice of top news, designed to make me get angry and then succumb to anger addiction.

I can step off.

Thinking definitely makes a difference. As Hamlet so wisely said, “There is nothing either good or bad, but thinking makes it so”. For example, I’m aware that people sort of know when I’m not well disposed towards them however much I hide it, and that alters their behaviour. Not surprising – goodness, even cats and dogs know, even fish, they say.

If ever there were a time to think about good outcomes, it’s now – “love being you-am-I-are”. Thinking differently prevented a nuclear holocaust in 1983. I’m sure it can help us now. Time to step off the evil bandwagon. There’s a new year’s resolution I can subscribe to.

– “How to be authentic, lead others and create strong relationships.” I’m busy with the final edits for my new book which comes out in March (not to be confused with my last book, The Art of Conversation!). It’s available for preorder on Amazon here.

To give you a sense of it:

You can get so far in conversation by becoming articulate, having things to talk about and learning the give and take of two-way discourse and the skills of debate. But that isn’t sufficient to give you a meaningful or wholehearted connection that leads somewhere genuinely new or worthwhile. As Ali Smith said powerfully in her lovely book, Autumn, It has become a time of people saying stuff to each other and none of it actually becoming dialogue.

This requires different abilities, such as intuition, open-heartedness, spontaneity, lightness of touch and ease with uncertainty. Unlike the left-brain patterns and rational themes most often taught as “communication skills”, these abilities depend on the often-neglected attention of the right hemisphere of the brain.