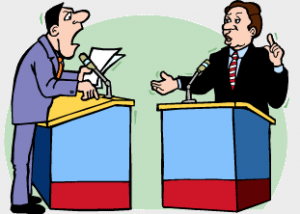 Do you find it easy to be certain? Or have you sometimes wished you were one of those people who is certain about their views and beliefs? What about now? Surely now?

I have craved certainty from time to time. For example, I was once a regular church goer. Then I wasn’t, but continued to envy those who were certain about their faith, who could enjoy the comfort of belonging to a community of people with like-minded beliefs.

Voltaire had thoughts on the subject:

Doubt isn’t a very comfortable condition, but certainty is a ridiculous one.

To debate is to practise the art of certainty. You decide a ‘side’ – there’s your certainty – and then you marshal arguments both to support your case and to destroy the arguments of the other side. As far as I understand it, a barrister does much the same. As a prosecution or a defence lawyer – with your ‘side’ established a priori – you construct arguments to support your case and find flaws in the opposing side’s case. Success is measured by your ability to marshal arguments in defence of your cause sufficient to win support for it.

The art of debate is a subject that I understand is addressed more comprehensively in the hallowed halls of Eton or Westminster than in our state schools. So it would have been a natural process for Eton-educated Boris Johnson to compose convincing articles both for and against Brexit before choosing which side to back in 2016. It must have come easily to use his natural debater’s flair and vigour to support a case with unflagging certainty and, like others, he has shown chameleon skill in this art many times as a journalist over the years.

What does the debater do? – look at an opponent’s arguments maybe, but only in order to defeat them. It’s not a search for truth; the speaker is never influenced by opposing arguments; it’s always a battle, us against them.

This ‘debate’ method spills over into media interviews, as I describe in The Art of Communication: “Most conversations on TV and radio news are set up as interchanges between people with fixed opposing points of view, for example an argument for something and an argument against, with a facilitator intent on keeping the argument polarised.” The idea is that this makes for more lively television or radio. Often it does, but always at the expense of subtlety and intelligence. And deeper truth, I would say.

Social media and algorithms also hugely encourage the taking of sides, by driving us through our preferences into silos where we all think the same as each other. Our choice of news channels does the same. This contributes enormously to the building of tribes, where we naturally agree with everything our tribe stands for on a myriad of issues instead of thinking each issue out for ourselves. A supporter of a political party becomes like the football fan who proclaims, “The team’s the thing. I’m loyal to you through thick and thin, be you the best, be you the worst, tell me what to think, I’m your loyal base.” Loyalty becomes certainty.

But surely, if ever there were a time for certainty, this is it? You can’t shilly-shally in a pandemic; life and death decisions have to be made; people need clear instructions. Populations have always wanted strong leaders, and in times of danger and uncertainty, the desire for strong leadership increases. What is “strong”? Many would say it’s being certain and not changing your mind.

But wait, what about the science?

In this time of coronavirus, we are all talking about the (weird definite article) science. Science is admired by many because it deals with certainties.

But science isn’t certain, far from it. As theoretical physicist Carlo Rovelli says,

“Science is not about certainty. Science is about finding the most reliable way of thinking at the present level of knowledge. Science is extremely reliable; it’s not certain. In fact, not only is it not certain, but it’s the lack of certainty that grounds it.” The New Republic, 11/7/14.

Or, to quote the example I give in my book:

Nobel Prize winner, physicist Richard Feynman, considered one of the best scientific minds since Albert Einstein, confided in a BBC Horizon interview that he was content to live with doubt and uncertainty and not knowing. He thought it was more interesting to live not knowing than to have answers that might be wrong, and that it was important for scientists ‘to leave the door to the unknown ajar’.

And, the chapter continued, “It’s not a recipe for paralysis, merely a willingness to continue without an insistence on certainty.”  The scientist doesn’t mind saying “I don’t know” when that is the truth. “I don’t know” is sometimes wisdom. Pretending to know everything is absurd.

Coming back to leaders, they may or may not “leave the door to the unknown ajar”; but making firm decisions is certainly an essential part of their business. Jacinta Ardern, Prime Minister of New Zealand, manages the conundrum so well. It takes a subtle brain to make space for doubt. She doesn’t pretend that answers are easy. She shares doubt. And then she makes clear decisions. That is, she doesn’t adopt a position and then summon ‘facts’ to back it up, like someone in a debating chamber. She certainly doesn’t create additional ‘facts’ to support a position when it seems to be crumbling. (Nor indeed does she employ certainty as if talking to nursery school children.)  On the contrary, like a scientist (but a scientist with empathy, hurray!), she shares the facts, and then elegantly makes decisions.

There is all the difference in the world between these approaches. A leader has to make decisions of course. But that’s not the same thing as claiming certainty. Ardern’s way, “leaving the door to the unknown ajar”, allows for change when facts change; it acknowledges the complexity of issues. It enables truth, and therefore avoids the necessity of hiding behind obfuscation and bluster.

One learning for me in all this is that putting an emphasis on ‘certainty’ is to look in the wrong place. Here’s another bit from The Art of Communication, from the chapter on Wholeheartedness:

An acceptance of uncertainty allows us to adopt more subtle positions, such as the paradox of holding both opposing perspectives to be true or recognising the possibility of synergy between differing arguments. In conversation either/or will give you one kind of exchange; both/and will give you other more interesting and surprising encounters. The synthesis of opposites is a powerful force. …

Control [needing to be certain] can only hold a view that excludes its opposite. It can lead me to talk with only my own interest at heart, and therefore deprive you of yours, or to assert that I’m right and therefore know that you’re wrong; or to speak with the aim of gain for me and loss for you; or to speak “for your own good” rather than work with you. Control in its lack of flexibility tends to create opposition. Holding different perspectives at the same time on the other hand allows something entirely new to emerge. As Hamlet said to Horatio, ‘There are more things in heaven and Earth, Horatio, than are dreamt of in your philosophy.”

Wholeheartedness is free from control. When I’m wholehearted I give myself permission to be spontaneous, natural, honest and free of forceful striving. … When I accept uncertainty, insecurity vanishes, and so I’m free.

My final thought is that we could do a lot worse than to learn from Jacinta Ardern.

My thoughts go out to you as we stay the course in our different ways.
Go well,

“Doubt everything. Find your own light.” Buddha

I’ve quoted from my latest book above. It’s already a year old, yet I think it speaks to our times more than ever. It’s available as book, ebook or audio-book (though I wish I could have read my own book!) and the prices are good at the moment.

You can find all my books here on Good Reads. Maybe, buy here at Hive, which contributes to local book stores.

Get in touch if you would like to consider a few sessions (or a single session!) of coaching by Skype, telephone, Whatsapp etc.  There are so many issues coming up for people at the moment. You may find the presence of a listening ear that helps you to think more clearly and handle your emotions more successfully is just what you need to move forward more positively and confidently. Coaching can be simple, powerful and amazingly effective. To contact me, try email first: judy@voiceofinfluence.co.uk.