Frog in the Pot – How to Deal with Creeping Change 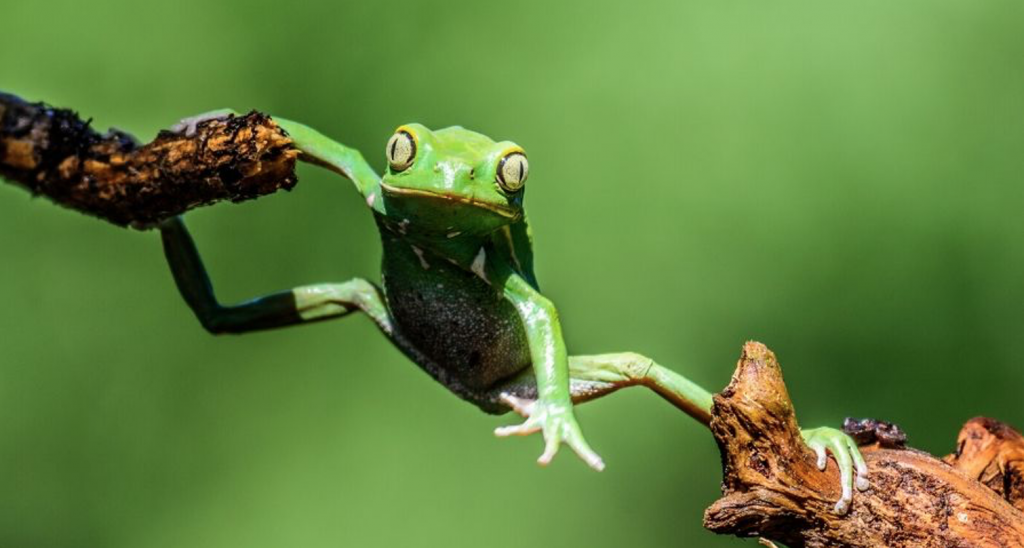 “As long as nothing changes and I hang on, I’m fine.”

I have that story about the frog in a pot on my brain – already disproved by the way. It says that if you put a frog into boiling water, it leaps out right away, whereas, if you put a frog in cool water and gradually heat it to boiling, the frog doesn’t become aware of the threat until it is too late. Okay, not true apparently. But it’s too good a fable to give up, because we recognise the metaphor.

I recognise it, anyway. I’m feeling a bit like the fabled frog currently. During lockdown, like you maybe, I read a lot of books, including one on World War II. It made me wonder what it would have been like to vote for Adolph Hitler’s Nazi party in Germany in 1932, honestly believing it would rescue my nation from ever-worsening economic depression and the humiliation of the settlement after World War 1; only to find the political temperature rising steadily to the boil with the rise of the SS and the first concentration camp, arrest and harsh treatment of political opponents and undesirables, then gypsies and Jews; secret police, paid informers, absolute control of the military, justice system and media; children educated in the dogma, and finally the phase of studied ignorance, fear of arrest making people less likely to speak out against atrocities; everyone maintaining a fantasy of normality in a nightmare world. … I certainly wouldn’t have been voting for genocide in 1932; but the ground shifted, the water heated up, and it got too late to jump out.

It’s easy to miss gradual change. I’ve just watched the recent Skoda Attention Test advert and my attention to detail was amazingly feeble. Is you haven’t yet, try it for yourself – it’s quite entertaining. Awareness of piece-by-piece change is important in all parts of our lives, and we need to learn to join the dots if we’re to avoid unhappy surprises. I’m not suggesting we are living a repeat of the 1930s; life doesn’t repeat, quite. But I do wonder about creeping change and what we can do about it.

Lockdown in its sudden contrast shone a light on change. I live in leafy Surrey, and I can’t say I’d really noticed that I was being quietly suffocated and damaged by dirty air, even with more cars and aircraft always overhead. Then lockdown last year produced changes writ large. How clean the air! How clear the atmosphere! How loud the sound of birdsong too without the noise of traffic!

Another gradual change interrupted by the pandemic was work patterns. We had gradually become habituated to working lives that never switched off, with mobile phone domination, lengthy and increasingly busy commutes, zero-privacy open-plan offices, work-and-family juggling – little of it known to our grandparents. The pandemic showed that the lifestyle wasn’t inevitable.  Many could work efficiently from home. In pyjamas if they wanted. The rhythms of pub, gym, shopping, eating out, entertainment, sport, travel – all stopped, and we survived. Some of us even preferred it.

The pandemic’s statistics were equally stark. Okay, I knew about austerity, food banks and children going hungry. But then the pandemic revealed extraordinary regional differences in health and wellbeing. The Office for National statistics reported a difference in longevity between Westminster and Glasgow City of 11.3 years. What differences in nutrition, physical and mental health and life chances are hidden in such an extreme figure? It was hard to fathom. A UN report on extreme poverty in the UK corroborated “a harsh and uncaring ethos”. Amnesty International’s 2020-21 global report criticised the UK’s ‘headlong rush into abandoning human rights’. Who knew? Well, we sort of did, but as changes happened bit by bit, we didn’t look hard enough.

Meanwhile, the pandemic took our attention away from other apparently isolated changes that added up. We discovered that our centuries-old institutions were also not set in stone. Who knew that American and British democracies were vulnerable? Who realised how many of the pillars supporting a democracy were there by honour and convention and could be knocked down if people were sufficiently audacious.

And the most serious incremental change of all? Changes to our planet caused by humans: logging, mining, invasive agriculture, over-fishing, destruction of habitats, shrinking bio-diversity, pollution, climate change and – well there’s a surprise! – invasive species and disease. 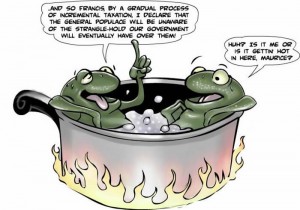 Okay, so that’s why I feel we’re frogs in the pot. It’s hotting up. It’s complicated. Our froggy heads are already getting woozy. What on earth can we do? Wiser heads than mine are seeking solutions.

I have just one lateral idea, very close to home:

To explore a little, away from our tribe

By tribe I mean our profession, club, team, educational and financial set, political party, media affiliations, religion, race and gender. It’s great to have a community. But when we chat only within our ‘tribe’, we get to believe that our view of the world is the only valid one; and blind loyalty is not a good idea when the ground is shifting under your feet. Maybe you were a Republican Senator yesterday and still say you are today, but are you sure that ‘Republican’ hasn’t completely shifted its meaning while you’ve been looking the other way? Are we still confident to rubber stamp every proposal of our party, without checking with our inner intelligence first? Maybe we have always trusted the same respectable newspaper but, while it still looks familiar, are we sure that over time a new owner hasn’t quietly changed it in all but name? The name isn’t the thing. The organisation Right to Life upholds the death penalty; our own European Research Group doesn’t want anything whatsoever to do with Europe.

Think and feel for ourselves

Values aren’t like a football teams where you stick with your side whatever happens. At work, it’s not enough to ‘go along with’ policies if they destroy trust, hurt people or devastate the planet, even if evidence is the other side of the world, or the harm far in the future. This may create conflicted loyalties, but once your eyes are opened don’t shut them again; do whatever feels possible to remain true to yourself.

In close relationships, ‘going along with’ things that are wrong, through fear, low self-esteem or misplaced loyalty is like the frog ignoring the temperature of the water, and the day will come when the water boils. Much better to seek ways to talk now.

Find out about things that matter to you. Explore various sources of information. And then trust your intuition. If something feels cruel, it probably is cruel. Your inner voice speaks the truth.

Well, this is an article I have written with myself in mind as the needy recipient! If it speaks to you too, I’m happy.

If the uncertainties of our times are getting to you, maybe you’ll like this poem by Wendell Berry:

When despair for the world grows in me
and I wake in the night at the least sound
in fear of what my life and my children’s lives may be,
I go and lie down where the wood drake
rests in his beauty on the water, and the great heron feeds.
I come into the peace of wild things
who do not tax their lives with forethought
of grief. I come into the presence of still water.
And I feel above me the day-blind stars
waiting with their light. For a time
I rest in the grace of the world, and am free.

Self trust is a theme in my TEDx Talk which you can find on TED.com.

My The Art of Communication explores modestly one or two of the same themes – for example, successful communication is more about how you are than what you say or do.

Here are links to my other books. I’ll be very happy if you find one or all of them useful, and tell me what you think.

The Art of Conversation – how to have truly two-way satisfying exchanges.

I’ve given you links to bookshop.org that support local bookshops, but you can buy the books everywhere, including e-versions and audio.

Springtime – new beginnings. Maybe time to have thinking space with a coach? Get in touch if you want to talk it through.