Yes, even during a pandemic … 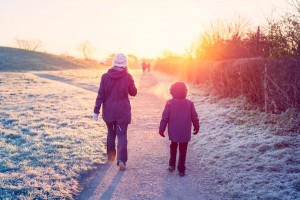 Perhaps because I saw fewer people last year, I thought about friends and family and valued interactions more than usual – both face to face and via the internet. It made me ask myself what made certain relationships stand out.

Has it been the same for you? And have you found certain relationships meant more than others? What were your best interactions like? Energising? Fun? Natural and easy? You felt understood? Sensed a real connection?

Special encounters can happen with the person you love the most, but also with complete strangers. In the summer when I wrote The Art of Communication, I recorded the following in my diary: *

“The little cabin we booked to rent in Shropshire was next door to an old house containing a restaurant that was shut at present. The owner, Elizabeth, came out to meet us and briefly explained that her husband wasn’t available to open the restaurant during our stay as he was currently ill. She showed us around our cabin, invited us to contact her if we needed anything, and then withdrew. Later, as we strolled out to explore, we paused by display shelves in the front garden containing a variety of interesting jams and pickles and unusual garden plants for sale, set up by our host.

“We didn’t see Elizabeth again until the morning of our departure a few days later, when she emerged from the house to wish us goodbye. As we said our thanks and farewells, we quietly asked her about her husband, and she explained that after a few years of ups and downs with cancer, his condition was now terminal and the time remaining probably short. As we listened, she told us about his work as a restaurant chef, their life in other cities, and some of the challenges of running things on her own now. We admired her garden produce and plants and commented on the variety of birds that were attracted by the food she put out in feeders. Encouraged by our interest, she told us about her excitement a couple of days before, when in the early dawn she had witnessed five nuthatch fledglings leave the nest. Time was suspended for a few moments and I felt physically the frisson of our connection.

“What was it? A short inconclusive conversation with a stranger. Yet I took much more from our conversation than some sad facts and some happier ones. It felt as if we had shared for a moment a larger theme of life. Such words are perhaps too abstract and fail to recognise how real the exchange felt – to each of us, I think. The truth lay in some in-between-ness; and it touched us.”

* This became the prologue of The Art of Communication.

What made such a casual short encounter exceptional? The first word to spring to my mind is empathy. And that was true of other memorable interactions too. I’ve been pondering on that and thinking that it matters – hugely – to all of us.

The first thing that strikes me is that empathy is personal. (It’s like the word sorry, in that you can’t actually practise it in any genuine sense on someone else’s behalf – though people try it all the time with sorry, perhaps with empathy too). Some people possess an impersonal kind of friendliness. They may be amiable, genial, convivial, gregarious, extrovert, outgoing, easy-going, good-natured, agreeable – there are loads of ways to describe it – but their friendliness is non-specific. For many such sociable people, friendliness is not their number one priority, but more a way of oiling the wheels on their way towards whatever is their first concern. (If you’re interested in MBTI (Meyers Briggs Type Indicator), ENTP might be an example, with an extrovert expression of friendliness that’s not the number one priority). You will certainly know people like that, at work maybe, or in the public arena.

Empathy is not a public attitude. It’s one-to-one, personal; and it’s a response rather than an attitude. When you are empathetic, you tune in to micro-signals and catch the vibrations of someone’s feelings and thoughts, whether joyful or painful, and you join them in that same place. It’s Rumi’s, “There is a field, I’ll meet you there.”

Empathy perpetually changes according to what it finds, so it has to be light and flexible, and open to the unexpected. Sometimes it’s silent and listens, sometimes it moves to specific words and action. It’s not generalised. If you have ever been in a bad situation and had someone dealing out sympathy in a general way, you’ll know the difference. There’s nothing so annoying as sympathy taken off the shelf, a fix-all attitude to adversity that’s all about the other person – “I know exactly what you’re feeling.” Empathy doesn’t know; it isn’t knowledgeable. On the other hand, it is intelligent – it sees (hears, feels, tastes, smells, intuits) clearly what is.

Intelligence: Intelligence is just openness of being.
Being open we respond with fresh insight. – Osho

Empathy is connection with your equal

Secondly, empathy is a connection that takes place only between equals (or as equals). You have to breathe the same air. This is acutely important. If I think I’m better than someone else, I don’t reach them. And how many ways there are to feel better than other people! Maybe I received a better education than you; I’m more knowledgeable. Or I went to a school where we were taught that we were exceptional; or grew up in a religion of chosen people. Or my parents had more money and we belonged to a “better class of people”, or I’m “cultured” and have a superior accent. Or, I’m the teacher, expert, voice of experience.

And, of course, it works the other way too. Maybe I think I’m worse than other people, less well educated, more ordinary, ignorant, poor, stupid, uncultivated, badly spoken, with not much going for me at all. Maybe I think I’ll never make anything of myself, always be an outsider. Maybe I make constant comparisons and come out of it badly. Whether we feel superior or whether we feel inferior, we struggle to connect. Connection happens in the absence (however temporary) of better and worse.

Think back again to times when you have really connected with someone. What was true of those times? I would guess it wasn’t that you were the same, but equally there was no superiority or inferiority; you met side by side on the same ground of understanding and feeling understood. It put you on the same wavelength. Literally, your vibrations were in synch with each other. When this happens, something new – an idea, a solution or a breakthrough – often emerges.

So here we are at 2021. And we have a choice, both individually and on a global level.

Either, we play better and worse, and compete and fight on the premise that there’s not enough to go around – it’s my oil, my land, my vaccine, my water, my food, my job. I can turn everything in life into a fight: I win and you lose, or I lose and you win. I can fight disease, fight depression, fight the system, fight everything and everyone that’s other. I’m better than.

Or, we can connect and seek common cause. The world is telling us in increasingly urgent terms that the planet is interconnected and we won’t survive in silos whether we like it or not: our good health depends on global good health (viruses aren’t good at respecting borders); climate catastrophe will create shortage, uninhabitability and people movements on a scale we haven’t yet dreamed of. We’ve got to think more joined up even to save ourselves. Where’s the latest place they’ve found plastic – within a foetus in the womb? No gain in bleating that it’s not my plastic! Everything is connected. We’re too informed today to pretend otherwise.

So my intention this year is:

My warmest good wishes to you,

If you’re interested in this article, you’ll enjoy The Art of Communication – How to be Authentic, Lead Others, and Create Strong Connections. Relationships can be the hardest thing in life, and also the most rewarding and fulfilling when you know how. This book explores ways to deepen your connection with others.

The Art of Conversation – Change Your Life with Confident Communication is a great handbook to help you communicate better in every situation. Full of practical hints and tips.

Voice and Speaking Skills For Dummies contains a wealth of resources for improving your voice and communication. Great to dip into for particular voice and speaking issues.

Butterflies and Sweaty Palms – 25 Sure Fire Ways to Speak and Present with Confidence. This is the book for you if you ever suffer from performance anxiety. Get rid of your nerves now! The information has been tried and tested, and is highly practical.

Voice of Influence – How to Get People To Love to Listen to You. Acquire the voice you would love to have, and transform your impact.

A few sessions of one-to-one work with a coach might be the answer to to your current situation. Whether it’s about relationships, or feeling stuck, or wanting to give yourself a better chance of advancement, or wanting to find who you really are, coaching gives you a unique space to deal with issues in your life. Online or telephone coaching works brilliantly. Contact me if you want to have an informal chat about it – by email in the first instance: judy@voiceofinfluence.co.uk

TIME FOR A POEM

Read the whole poem and enjoy it. Or if your brain is jangling today, just read the last four lines as we embark on the new year.

I have News for You by Tony Hoagland

There are people who do not see a broken playground swing
as a symbol of ruined childhood
and there are people who don’t interpret the behavior
of a fly in a motel room as a mocking representation of their thought process.
There are people who don’t walk past an empty swimming pool
and think about past pleasures unrecoverable
and then stand there blocking the sidewalk for other pedestrians.
I have read about a town somewhere in California where human beings
do not send their sinuous feeder roots
deep into the potting soil of others’ emotional lives
as if they were greedy six-year-olds
sucking the last half-inch of milkshake up through a noisy straw;
and other persons in the Midwest who can kiss without
debating the imperialist baggage of heterosexuality.
Do you see that creamy, lemon-yellow moon?
There are some people, unlike me and you,
who do not yearn after fame or love or quantities of money as
unattainable as that moon;
thus, they do not later
have to waste more time
defaming the object of their former ardor.
Or consequently run and crucify themselves
in some solitary midnight Starbucks Golgotha.
I have news for you—
there are people who get up in the morning and cross a room
and open a window to let the sweet breeze in
and let it touch them all over their faces and bodies.