Peppa Pig doesn’t do it 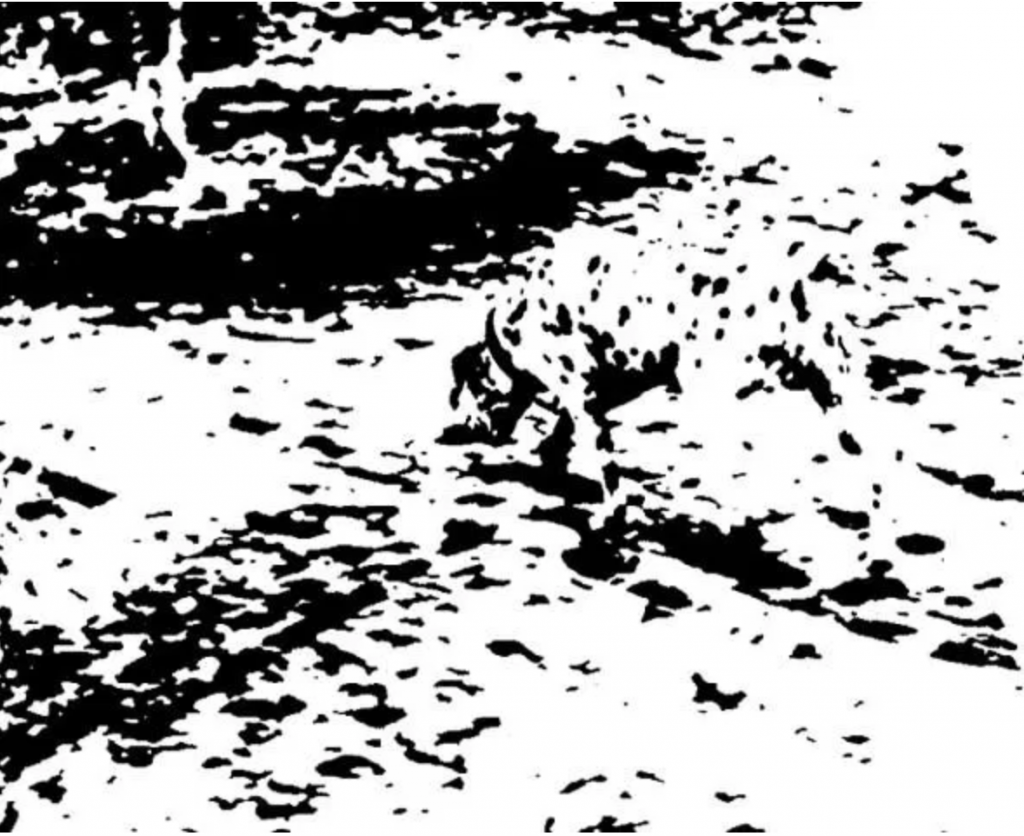 Left-brain: “This picture displays random dots.”  Right-brain: “Ah, I see a Dalmatian dog sniffing amongst the leaves.” Image from Iain McGilchrist: The Master and His Emissary

I love the internet as much as the next person. I don’t want to go backwards, I really don’t. It is interesting how little losses keep popping up though. The spatial and directional awareness of being a good map-reader, for instance. The ability to find a book or a word quickly and easily through familiarity with the alphabet. Problem solving through thinking. Spelling. Memory. Concentration.

I was powerfully struck by a recent example. A teacher attending a talk on the brain in Toronto by Iain McGilchrist commented, “I am a teacher of 7–11 year-olds. My colleagues and I have noticed in the last three or four years that we have started having to teach children how to read the human face.” It turns out that all that time engaging with the mother’s face in the first years of life is vitally important for a child’s ability to understand expression and to empathise. Substitute the distraction and over-stimulation of TV, I-Pad and other technology and a vital development stage is missed. Peppa Pig doesn’t do it. Who knew?

Our brain is divided into two hemispheres, clearly separated, and each hemisphere brings into existence a quite different experience of the world. Technology is a reflection of a world dominated by the left hemisphere of the brain. The left hemisphere is certain, rigid and exclusive – more scientific it would say, as it categorises and processes material with a detached narrow focus – and it has the data and the gift of the gab to promote itself. But the right hemisphere understands relationship, nuance, humour, symbol and metaphor. It rapidly takes into account more and better integrated information over a broader range, though without the voice or statistics to proclaim its rightness.

It’s a bit like our two eyes – each eye sees a different image, but that difference is crucial so that we can understand distance and perspective through processing information from the two different images. Identical images wouldn’t help us at all . So too with the hemispheres of the brain – they perform different jobs: we need their different attention, preferably the right hemisphere as pre-eminent to give us a broader more holistic understanding, and the left hemisphere as its executive to move to action.

The left-hemisphere squabbling over Brexit is an example of the impossibility of resolution when thinking is confined to left-brain certainty, rigidity and exclusivity. The world is full of such examples.

We used to think that a left-hemisphere stroke was a disaster because often sufferers lose the power of speech as well as use of the right hand. But John Cutting, a psychiatrist who spent years with people who had had right hemisphere strokes discovered that they couldn’t understand humour, metaphor or any implicit meaning, nor poetry or tone of voice, nor read faces or body language; and these disabilities in the end represented a much greater loss of their humanity for them and their families.

So back to recognising faces, does it matter? Of course it does, hugely. But the advantages are neither precise, certain nor measurable, so the left-brain doesn’t really care. There’s no easy economic case to be made. The influence on the bottom line is not direct. The effect on exam results and league tables hard to argue. The relationship with IQ indistinct. The connection with delinquency and crime is unproven. As for connection with empathy and kindness, well where’s the proof, and where do empathy and kindness stand in the pecking order anyhow? Meanwhile, the right-brain knows that relationship is pre-eminent.

There’s no doubt that we live in a world that favours the left-brain and ever more so. The left-brain likes to think that it’s the grown up in the room, when experience suggests otherwise. How appropriate this week that it’s the children of the world who stood up and demonstrated against climate destruction, the gravest problem our planet is facing, while the grown ups wittered on about ferry companies with no ferries, expensive preparations for avoidable no deal scenarios widely seen to be disastrous and hero/villain arguments about long dead politicians. If your right-brain is functioning, you’ll appreciate the irony even if, like me, you find yourself speechless.

Let’s nurse our sense of irony; let’s read a poem; let’s use our creativity to find new ways through, round, over or under the current chaos; let’s imagine the world we actually want; let’s value the humanity in each other; let’s be kind.

Human kindness has never weakened the stamina or softened the fiber of a free people.
A nation does not have to be cruel to be tough. Franklin D. Roosevelt

Left-brain/right-brain is one of the themes of my latest book. I’m very excited about it – it’s been four years in the writing, and comes out in just 3 weeks time – on 8 March. You can pre-order your copy here or from your usual channels.

Here’s a summary – hope it inspires you to buy a copy!

It has become a time of people saying stuff to each other and none of it actually
becoming dialogue. Ali Smith: Autumn

You can get so far in conversation by becoming articulate, having things to talk about and learning the give and take of two-way discourse and the skills of debate. But that isn’t sufficient to give you a meaningful or wholehearted connection that leads somewhere genuinely new or worthwhile. This requires different abilities, such as intuition, open-heartedness, spontaneity, lightness of touch and ease with uncertainty. Unlike the left-brain patterns and rational themes most often taught as “communication skills”, these abilities depend on the often-neglected attention of the right hemisphere of the brain.

When you take the step change to learn these new, sometimes counter-intuitive, ways of relating, conversation can become the source of extraordinary vitality, capable of generating new insights, breathing life into relationships and even producing powerful new thinking able to transform the world we live in.

I set out to discover what makes such conversations so extraordinary, and what we can learn that will guide us to have them more often.

This is a book for leaders and business people, but also for anyone who suspects that conversation could be something more – more genuine, more energising, more generative, more creative and generally much more productive.