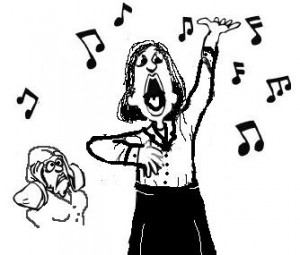 Focusing on the extraordinary 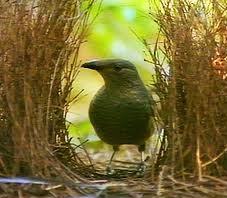 Have you come across the bowerbird of Australia? It’s a dull-looking species, fawn-brown in colour. The male bowerbird builds a nest surrounded with a variety of brightly coloured objects he has collected which may include hundreds of shells, leaves, flowers, feathers, stones, berries, and even coins, nails or pieces of glass. But the most remarkable part of the construction is a grand avenue of sticks leading to the nest. The sticks are arranged with precise care so that those closest to the nest are the smallest and those farthest away are the tallest, which gives a false sense of perspective so that when the bowerbird stands at the entrance to his nest he looks enormous and impressive to the female. Researchers have tried interfering to change the order of the stick heights, but when that happens the bowerbird painstakingly over several days restores its original configuration. Does the bird understand perspective?!

And humans? I read about Eileen Nearne who died at 89 this month. You’d never heard of her? Neither had I.

Eileen Nearne was just an old lady who lived alone in Torquay. The most that neighbours had to say about her was that she used to enjoy talking about her cat.

Yet after her death officials found in her flat an amazing treasure trove of war-time papers and medals, including the MBE and the Croix de Guerre. It turns out that she had an extraordinary history no one knew about.

In 1944, aged 23, as a member of Winston Churchill’s secret Special Operations Executive she was parachuted into occupied France, where she passed on intelligence and arranged arms drops as the only British agent with an operating transmitter in the Paris area. She operated during that crucial period until she was arrested by the Nazis in July 1944. She was tortured, then sent to the notorious Ravensbrück concentration camp where thousands were executed or died. But she managed to escape and was able with help from a French priest to stay in hiding until rescued by the advancing allies. Her bravery contributed importantly to the war effort. Not ‘just an old lady’ after all!

Tim Gallwey, often called the ‘father of coaching’ by those in the profession, talks about his profound belief in the inner intelligence and wisdom in each one of us, in human life itself.  He says that a person is much bigger than what you see. As coaches we believe in the existence of potential beyond what presents itself.  We may see withdrawal or the sense of something shut down but we do not believe it. We manage to see through and beyond the acts that people put on either to seem less capable than they are or to make us believe they’re wonderful but which actually cover up their true ‘wonderfulness’.

I have been surprised more often than I can say by how people can be unexpectedly extraordinary. And it tends to happen when you don’t criticise them internally or consider them small.

The other side of this is:

It is so easy to ignore and deny what is in us. We are capable of being exceptional. The skill lies in discovering how to allow that to happen …

“The whole point of being alive is to evolve into the complete person you were intended to be.” says Oprah Winfrey

Curiosity and playful experimentation are effective approaches. Criticism, self-labelling and a rigid outlook block it. The best place to learn is in interacting with people – which is why workshops where you have the freedom to interact, investigate and explore with others are so productive and energising. They are often the place that gives birth to the extraordinary in people.

Sometimes it just takes someone else to see the exceptional in us before we can see it ourselves. They ‘know’ it is there and that becomes our realisation of a truth. As the pianist Claudio Arrau once explained about his performances, “I don’t know what’s going to happen but I know it’s going to be something wonderful.”

So, what are you underestimating about yourself?

Your Voice Gives You Away!

Your voice is a powerful tool – but it can be a liability if you talk stridently or in a dull monotone. Learn how to speak with a voice that connects with your energy and feelings and see what an enormous difference it makes to how people want to listen to you.

Your voice can be a powerful tool when you know how to use it. Your voice reveals a lot to the world about you so you need it to tell the story you want! Yet it is a subject that has been under-investigated. Apart from noticing different accents most of us distinguish very little about the voice: high voice maybe, deep voice, squeaky voice, rich voice, strident voice … But we all know the difference in how a voice makes us feel. We are all influenced greatly by the sound of a person’s voice.

The sound of your voice in fact tells a detailed story about you, not only about your present state of mind but about your history.

What are the signposts to what is going on?

A voice that never changes

Many people have only one voice. They talk nasally, or in a dull monotone, or in a tight constricted way or very high like a child. Whatever they say, however emotional the content might presume to be, the voice just comes out the same.

Why is that? At some time in their life they have separated emotion from vocal expression and become tense around shoulders, neck or jaw or all three. Tension in these places can be of the moment, but some tension they will have been carrying around since they were very young in response to early life experiences. Full expression of the whole range of human communication is blocked by this tightness. If you close your throat or grip your jaw you are cutting off the part of your body where feelings, emotions, natural impulses and much of what makes us truly human lies.

Some people speak in a pleasant way but still have a voice that is basically cut off and fails to connect. It can be deep and imposing, rich and resounding or warm and pleasant. But the sound does not express what is going on – and it never varies its quality. The listener is deceived – and often the speaker is deceived as well!

Why is that?  Someone who speaks in this way decided (sub-consciously probably) at some stage in their life not to reveal everything that was going on – in other words to put up a mask to hide emotions that didn’t seem acceptable. You will never get a spontaneous response from someone who speaks like this – there is always an infinitesimal pause before they react. Ask a spontaneous person about an exciting occasion and they will come back on the instant with warmth and excitement in the voice, “Oh, it was wonderful!”  Ask a one-voice person and you are more likely to get a constrained “Er, we had a great time, thank you.”

The voice that is truly expressive and thus influential is relatively free of bodily tension.  If your voice is free the sound resonates in all parts of your body communicating every nuance of what you are saying. As you become excited your voice goes up in pitch for a moment; as you sound determined the voice resonates against your chest and as you express care or concern your voice tone comes from your heart.  The voice does this automatically, constantly varying, reflecting spontaneously the meaning of your communication. Hundreds of bones and muscles in your body are involved in conveying your meaning through resonance.