Travelling to a different emotional space … 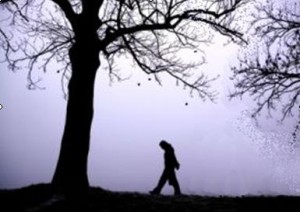 A story of walking out

I was feeling unappreciated and misunderstood. “I’m going out!” I announced with an air of finality like a teenager, and I stomped out.

Down the road, cut down the alley, across the main road and down towards the farm on the other side, then up the track that crosses the railway; finally up the steep hill through woods on the other side. I was puffing slightly when I reached the path along the downs at the top. I struck out further north, beyond our normal walking tracks into less-known territory, seeking to get as far away as possible. Soon I was a few miles from home, walking briskly along a woodland path through beech and chestnut. The signs around me of the dying year suited my frame of mind.

It was a beautiful autumn day, and I strode out, enjoying the rhythm of my steps and the energy of the exercise. I walked for a good hour and didn’t see a soul: surprising  how much space there is in the countryside – even in the south east! In the solitude I glimpsed a young deer which emerged from the trees up ahead, crossed the path calmly and disappeared into deep undergrowth. I felt pleased that it hadn’t panicked: silence, space, me and a deer.

By the time I found myself walking towards home rather than away from it, two hours had passed and I was deeply absorbed with an idea in my mind for a new project. By the time I reached home I was all eagerness to write it down.

My earlier mood? I could remember the earlier spat, but was in an entirely different place mentally and quite happy about the way forward. Plus, there was that warm creative glow…

Sometimes, all that is needed is space to free up and think; and the mind frees up as the body frees up. Nancy Kline in her excellent book Time to Think suggests that we all function immeasurably better when we have time to think for ourselves. Independent thinking is a rare commodity in the workplace. You might say that you are thinking all the time, but being engaged on a problem and thinking for yourself are different. Thinking for yourself requires space and attention. You can give that attention to yourself or someone who knows how can hold that listening space for you. Time, space and attention are the sponsors of creativity.

At my courses, when I observe participants happily engaged in an exercise, I realise that an important element of this kind of training is the space it gives to minds freed up by enjoyment to think independently and creatively. The changes that are born in that thinking space are often transformational and extraordinary.

What better time for thinking and creating than these shortening days of late autumn as nature settles down for its quiet season? – Nature has its time off too to prepare for spring. Farmers wanting the best from the land leave fields fallow some years to restore nutrients. People need breaks to restore mental fertility and balance. I wonder what will come into fruition for you in this “season of mists and mellow fruitfulness”?

… and what space you will give it to allow it to emerge?

The NLP Conference has an especially impressive line-up of speakers and topics this year. It’s always a great opportunity to hear some of the best NLP trainers and developers in one place.

My own session – “Hypnotic Voices” – strays into the area of psychotherapy. Successful  hypnotherapists use the voice with particular skill and provide excellent models of vocal magic. But their techniques will also be of great interest to coaches, teachers, public speakers and all who use language to ‘take people to a different emotional space’.

I talk about techniques – but it’s more than that. The spoken voice has a considerable effect on other people, more than we are aware of consciously. To make vocal connections on a subtle deeper level requires physical, emotional and holistic alignment. This is what makes the learning so fascinating and the ability so fulfilling.