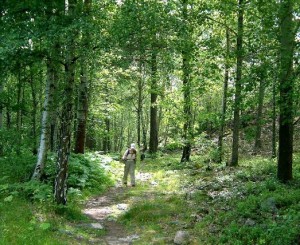 I took a familiar walk through the Surrey woods near my dad’s house the other day, but the usual path had disappeared.  You’d think those ancient woods would remain unchanged through the years. But they don’t. Each season when the bracken pushes through the pathways shift and alter, and change the route from road to lake and lake to hill top.

It set me thinking to how we tend to assume that we too are unchanging – same old nose (not quite the right shape), same old legs, same old thoughts, same old me …

Same old blood pressure written in stone by the reading  in the surgery … though I know someone whose blood pressure hits the roof the moment they meet the doctor and is different as soon as they reach home!

Same old eyes, as the optician recommends set lenses … though I know that they improve with muscle exercises and are in any case more effective when I’m not tired.

Same old genes … as assumed by genetic research which tells me that this and that is to be expected because my genes say so. I almost bought that one till I heard about genes that switch on and off!

Same old brain; just so many cells – even if they gradually die off as you get older (abandon hope all who enter here).

Ah, but now we are learning that the brain is more plastic than previously thought. Cortical remapping occurs in response to injury. People with  strokes, cerebral palsy, and mental illness can train other areas of their brains through repetitive mental and physical activities. Life experience changes both the physical structure and functional organisation of the brain. Musicians develop stronger neural pathways that support musicality and dexterity. The brain waves of professional jazz players become more synchronised as they jam together. World-class athletes develop stronger alpha waves to cope with the ever-changing mix of intricate challenges they face. There is no doubt now –

If we keep thinking similar thoughts we are carving out neural pathways that make it increasingly easy to pursue those same thoughts next time… and next time … So constant negativity carves out a negative pathway. And self-believing thoughts carve a positive can-do pathway.

(Incidentally, what are you thinking NOW…?)

I’ve just finishing reading Bounce: The Myth of Talent and the Power of Practice by the international table tennis champion, Matthew Syed. He tells how just one street, Silverdale Road in Reading where he lived, produced at least 10 international and national table tennis champions in the 1980s, more than the rest of the UK put together. How on earth did that come about?

Syed explains that the enthusiastic local primary school teacher was a top national table tennis coach and a senior figure in the English Table Tennis Association, and any local kids who showed potential were persuaded to take their skills forward at the local club, Omega – open 24 hours a day – where they were given plenty of time, excellent coaching and  self belief.  A combination of opportunity, enjoyment, purposeful teaching with productive feedback and many hours of practice produced champions from a relatively small pool of young people.

This all points to the conclusion that nothing is just made that way, nothing is fixed, nothing is ordained. On the contrary, everything is plastic, everything is changeable, anything is possible. As in Silverdale Road, even neural pathways can be changed and new ones developed – if we do the work of activity and repetition to make it happen.

So when that moment comes – perhaps after you have been to the gym a few times, or eaten healthily for a week or so, or meditated or done early morning yoga for a few sessions, or walked to the station instead of taking the car once or twice, or sent out a dozen CVs with no reply, or phoned a few potential clients with little response – when that moment comes – when something inside you says,

“There’s no point in this, I’m not the sort of person who succeeds at this stuff”,

then you can know that yes, you are that sort of person – you are currently and always in the making – and that every bit of purposeful practice is taking you in the direction you want to go and will take you to where you want to be if you continue.

And, after all, life is not fixed like a noun. It’s not “arrival”, “success” or “achievement”. It’s always a verb – doing, moving, achieving, succeeding, becoming, being…

… and the neural pathways growing, shifting, changing, and finding new ways to the top of the hill! (your particular hill …)

Happy walks in the woods!