So, beyond protest, what? 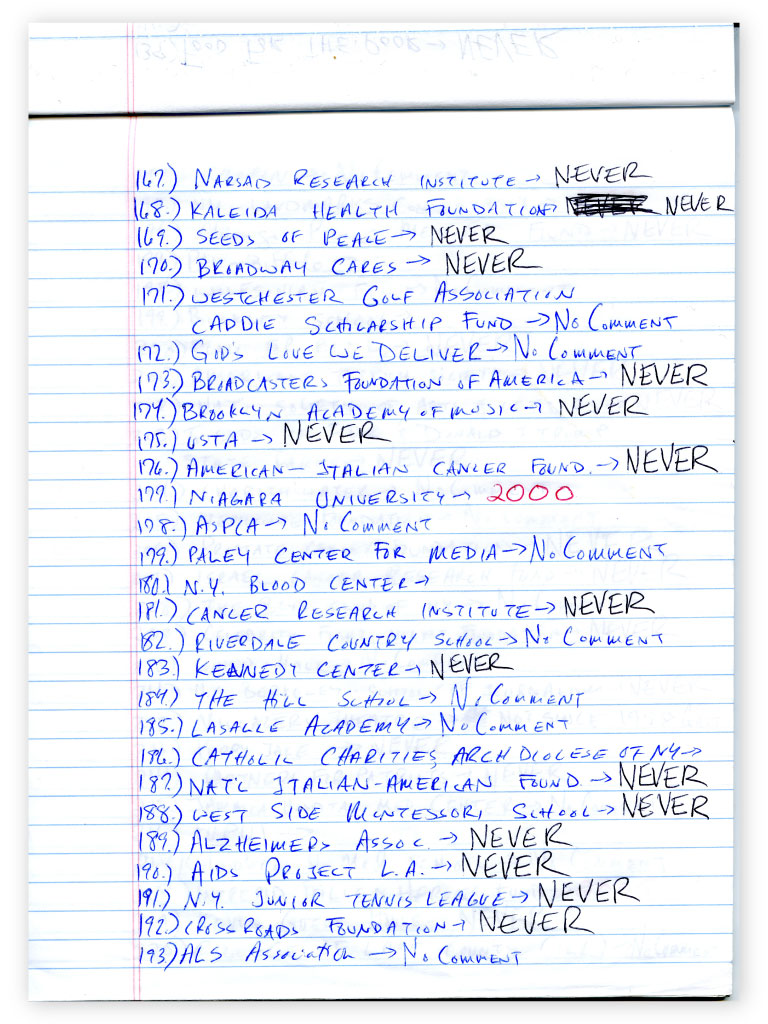 The Washington Post contacted 400+ charities with ties to the President to find proof of the millions he says he donated. They mostly failed. Here’s one of many checklists.

What can an ordinary person do about the extraordinary frightening state of the world? I’ve been struggling.

I started to write a newsletter a week ago, started another on Tuesday, found a new theme on Friday – but whatever I started turned into a rant connected to recent events in the USA. And what’s the point of ranting against a ranter who feeds on outrage and opposition? Moreover, everything I touched seemed to get more complex and difficult as I went.

What IS an issue?

I realised that whatever issue I chose, I didn’t know what I was talking about – I mean literally. What am I talking about – actually – when I talk about immigration, safety, terrorism, freedom, defence, abuse, Islamists, justice, populism, nationalism or even Brexit (I know, I know, it means ‘Brexit’ – that pretty much sums up the problem!).

What am I talking about for instance when I talk about immigration? It certainly sounds like an issue, but the word immigration covers too much – it might be summed up for one elderly person as a person with a disconcertingly foreign look; as someone escaping from terrible suffering abroad for another; as someone disgracefully driving wages down for an unemployed eastern-counties man; as someone heroically holding the care service together singlehanded for the family of an old person in need, or as an unrecognisable term according to an English person living in Spain (What immigrant, I’m an expat!)

That’s the problem with abstract terms: until they are further defined no one can know what exact meaning is intended. We put our own meaning to the word and fight our corner, but often people in the other corner are interpreting the word with a meaning directly the opposite of ours. This makes it impossible to understand each other. Or we can agree heartily, while meaning something very different. This happens a lot, and is what makes these abstract words powerful tools for cynical manipulators.  As we are seeing … and have been seeing for quite a long time.

Almost 70 years ago, the sociologist C Wright Mills wrote about the important difference between issues and troubles. He said a trouble is a tangible problem that concerns individuals in their immediate experience – it has a story. An issue is public – some value cherished by the public feels threatened. An issue is always expressed with an abstract word. Sometimes an issue gains all the attention of people and press, propelled by particular interests, but doesn’t connect with the actual troubles besetting people in their lives. (Politics is traditionally very good at this.) Sometimes, it’s the opposite: common troubles fail to get surfaced and formulated as public issues, and so fail to be addressed at a level where change can happen. (With me so far? – stick with it!)

So, for example, immigration is a huge issue, but what are the troubles that people (often with considerable help from politicians) attribute to it? – lack of work, a money-starved health system, the yearning for simpler days before mass travel? There’s very little mention currently of the various troubles that bring people to support the issue because that doesn’t concern its political backers; and only by understanding the troubles can appropriate practical measures be taken to solve the problem. Child abuse in the Catholic Church was a grievous issue, but only when the press brought to the fore the individual troubles – the harrowing stories related by victims – only then did something get done about it.

Why all this now? I think we’ve been led astray for many years by too easy acceptance of these abstract ‘issue’ words; we’re too easily horrified and outraged as well; too easily grabbing meaning from a headline, a tweet, an image or our favourite news outlet (unheeding of who is the actual power behind it); when our job probably should be to look more at the actual troubles that lie behind the issues and look very carefully indeed at their connection with named issues.

That’s what David Farenthold is doing. This highly impressive and surprisingly humble American journalist has been quietly and doggedly investigating the truth of the Trump Foundation for the Washington Post – tackling the issue of the President’s truth and generosity. He’s been painstakingly uncovering facts piece by piece, involving the public through Twitter, and going to source – i.e. the charities supposed to have been helped – rather than beating his head against the wall of Washington politics. (Photo of one of the lists he tweeted above) He’s discovered many lies and misappropriations, and the sheer amount of detail from named people in hundreds of different charities makes his stories convincing. I like what he’s doing. He makes me want to be better at seeking out genuine information; to be much more careful and discerning, more ready to explore different sources, more ready to question my assumptions – like a chess player maybe, who needs to use all his careful intelligence and attention to lock that king in a corner and call out Checkmate!

Only when thousands and thousands of us can support our facts and assertions with convincing detail will we feel powerful rather than outraged. Then together we might present some sort of a force for good.

Well, that’s today’s thought anyway. What do you think?

I can recommend any of the following:

Talks and workshops at St. James’s Picadilly in London on holistic thinking and spirituality. An eclectic mix of speakers. They certainly contain names of authors who have maintained their place on my book shelves through the years. Coming up: Deepak Chopra, Julia Cameron, Marianne WIlliamson, David Hamilton …

Learn meditation, Positive Thinking, Stress-free Living and more. Courses in London and other centres in the UK and all round the world. No charge and zero pressure, though you’ll probably enjoy the course and want to donate. They offer great sessions and conferences for coaches – some coming up later in the year.

I wanted to recommend Everyday Osho: 365 Daily Meditations for the Here and Now for a wonderful daily dose of good sense and inspiration, but it seems hard to find at a reasonable price. So I recommend any Osho – he’s written lots of books, just pick a title. Even my county libraries have copies.

If you ever decide to be a coach – life coach, executive coach – you’re never going to wake up one day and think, Yes, I have arrived. Even for the most experienced there’s always something to learn . A current theme for me at the moment is how presence and detachment coexist. Only detached and you don’t really connect; bring your whole self into presence and there’s always the danger of introducing personal preoccupations and tugs on your energy. So we remain centred and earth based and at the same time dancing on the sharp edge of the mountain peak. We hope never to slide below a certain level, and every now and then, the results astound us all in their rightness.

Get a coach. Get a coach, it’s worth it. For sure you can be more, and you’ll gain so much in the process of becoming what you can be. People around you will gain big-time too. If you want to contact me to talk through what’s possible, email in the first instance.

I also offer coaching in all aspects of public speaking, presenting and voice. You can book up a single session if you want to dip your toe in the water.

I’m running in-house courses on Public Speaking, Leadership and Walking Your Talk, Unconscious Bias and more this spring. Do contact me if you’d like a personalised workshop on any of those or similar themes from a trainer who’ll understand the different needs of your delegates – it genuinely makes all the difference.

As usual, my current books

The Art of Conversation
I gave an interview to Kinfolk magazine this week on silence in conversation – I found it a fascinating theme. The issue’s not out till summer apparently. The interviewer described the magazine as a high-end lifestyle and culture publication with a print readership of 170,000 people in over 100 countries. It certainly looks glossy!

Conversational skill does require ease with silence – it isn’t really about being articulate and having a fund of things to talk about – though that’s what most books on the subject would suggest. It’s much more about being at ease with who you are and knowing how to connect with others. Only then do you have satisfying and buzzy conversations.

Butterflies and Sweaty Palms
Subtitle: 25 brilliant strategies for speaking and presenting with confidence. It’s about WHAT to do if you’re scared. And don’t worry – we’re ALL scared at times, but can overcome it.

Voice and Speaking Skills for Dummies
The perfect resource to dip into to discover the power of your voice, understand how it works and use it like a professional, whether in meetings, addressing an audience, or standing in front of a classroom.

Voice of Influence
“The body language of sound”. Like body language, your voice gives you away. Find your authentic voice, speak powerfully and influentially, and reach people on a deeper level.

Spotted my first snowdrops in the wild this morning, peeping out of frosty grass. Good to see.